Sale on canvas prints! Use code ABCXYZ at checkout for a special discount!

Ginny At The Good Stuff

Come see Ginny's work at the March/April show at The Good Stuff Gallery! The theme of this show is "Artist's Best" as we say goodbye to the original owners Kat and Kent Peterson and welcome the new owner, Paul Doyle! 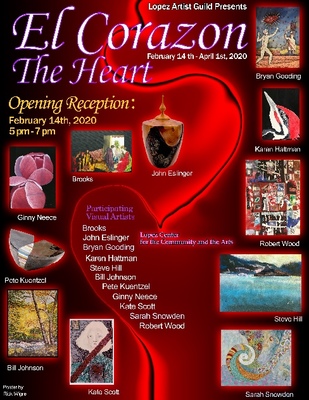 Lopez Artist Guild Presents: 'El Corazon, The Heart'. Ginny along with 10 other participating artists show their work in the lobby and meeting room of the Lopez Center for Community and the Arts.

Ginny Once Again At Adrift

Come see Ginny's art on display at Adrift! Ginny's art is once again gracing the walls of one of Anacortes's best restaurants. Stop in for a well-crafted meal at breakfast, lunch, or dinner and enjoy viewing some of Ginny's latest work. Adrift is an incredibly delicious restaurant that uses the bounty of the Skagit Valley and surrounding waters to create memorable meals featuring locally sourced meats, seafood, and produce. Stop by on your way to or from the Anacortes Ferry Terminal. Located at 510 Commercial Ave Anacortes, Washington Call (360) 588-0653 https://www.facebook.com/pages/Adrift-Restaurant/125586854129221

Come see Ginny's art at the Artist's Choice Show at The Good Stuff Gallery in Anacortes!

Come see Ginny's art at the Lopez Island Post Office! She will be showing there in conjunction with three other artists during the entire month of June.

Come see Ginny's first show at the café Luther's Table in downtown Renton! Her show will be hanging from January 2nd to February 6th, 2018. Luther's Table is a fantastic non-profit, community hub with different activities-from Open Mic to Theology Pub-every night. Family friendly and available for private parties and meetings, Luther's Table is a great place to hang out and enjoy a drink or meal. For more information find them on Facebook or got to their website: Lutherstable.org.

Ginny Neece is thrilled to once again be hanging her art in another fabulous "Tim and Kristin" restaurant. Their newest venture, Park Place at Madison Park is located, you guessed it, in Madison Park, right across the street from Lake Washington. The food is fabulous as can be attested to by the restaurant's 4.5 star rating on Yelp. For more information, you can find the restaurant on Facebook or go to its website:

Be sure to check out Ginny's current show at the fabulous Adrift restaurant in downtown Anacortes! Ginny has sold 5 paintings already so there continue to be new paintings to see as the sold paintings get replaced with new works. Adrift is an incredibly delicious restaurant that uses the bounty of the Skagit Valley and surrounding waters to create memorable meals featuring locally sourced meats, seafood, and produce so it is definitely worth the visit! Stop by on your way to or from the Anacortes Ferry Terminal. The restaurant is open for breakfast, lunch, and dinner.

Come see the "Inspirations from Colin Goode" exhibit in the Lopez Public Library.

The four artists in this exhibition began to meet to paint informally at Ginny Neece's studio on Lopez Island a year and a half ago. These include: Liz Taylor, Ginny Neece, Joyce Lyster, and Joan Giard.

Then Colin and Moira Goode invited them to their home/studio each week. Under Colin's gentle guidance and magical twinkle, the artists took risks, tried new mediums, critiqued each other's work, and delighted at having a community of friends in a warm, cozy environment in which to challenge themselves as artists.

Shortly after Christmas 2015, Colin was scheduled for heart surgery. One day while in the hospital, he smiled at Moira and told her, "I love my painting ladies!" When Moira told the artists, they were delighted. They all hoped for his quick convalescent and return, although it wasn't to be.
Sadly and unexpectedly, Colin died in the hospital on February 2, 2016. ...

Come see the work of multiple artists on the island as they pay tribute to their departed friend and fellow artist at The Colin Goode Memorial Art Show. Colin was an integral part of the Lopez Island 'artist community' as an artist, mentor, supporter, and gallery owner. Members of the Lopez Artist Guild join with other artists in the community to honor Colin's life and work. Many of the pieces of art on display were created at Colin's studio during one of the many classes he taught or workshops he hosted. The Opening Reception for the Colin Goode Memorial Art Show, sponsored by the Lopez Artist Guild, will take place on Friday, September 23, 2016 from 6:00 - 8:00pm. The show will run until October 10th, 2016.